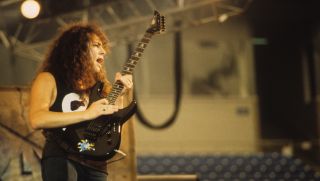 This past weekend marked the 30th anniversary of the release of Metallica’s landmark fourth studio album, …And Justice for All. In a Guitar World interview from 2002, guitarist Kirk Hammett discussed recording the album’s mainstream breakthrough song, “One,” including the gear he used in the studio and how he composed the track’s iconic middle and outro solos.

Said Hammett: "I lost a lot of sleep over that set of guitar solos! The main guitar solo at the end, with the right-hand, Eddie Van Halen-type tapping, came almost immediately. That guitar solo was just a breeze; what was going on with the rhythm section in that part of the song was just very, very exciting for me to solo over: The first solo was a little bit more worked out. I heard James playing some really melodic stuff over the intro, just doodling around, and I thought, That's pretty cool, I'm gonna use part of that. So I have to give credit to James for subliminally pushing me in that melodic direction. I think the first two licks at the top of the first solo are his, and the rest of the solo just sort of fell into place. That little chord comp thing in that first solo came from a major-chord exercise that I do all the time. I thought it would sound really good in the solo if I just staccato-picked it and resolved it right there. I thought the solo needed something to perk people's ears up.”

Hammett continued, "The middle guitar solo in that song, I must have recorded and rerecorded it about 15 million times. I wanted a middle ground between the really melodic solo at the beginning and the fiery solo at the end; I wanted that to sit very confidently within the song, but it sounded very unconfident, and I was never happy with it. Finally, it came down to the wire: we were mixing the album while simultaneously touring on the Monsters of Rock tour. One night, I flew from Philadelphia to New York City, and while everyone else was on their way to Washington, D.C., I went to the Hit Factory and rerecorded the solo again. I brought my guitar, I had one of my main amps sent to the studio, and I redid the solo there and finally nailed it. I was very, very happy about that! The next day, we played a show in Washington, D. C. It got panned by the critics, because we'd all only had about three hours of sleep and were exhausted. But I got a good solo the night before, so it was worth it.

"I think at that point I was using the ESP neck-thru-body KH-1 guitar, with the skulls on the fingerboard. I'd gotten that guitar in '88 and used it pretty prominently in the studio. I also used an ADA preamp and an ADA MP-1—it was a programmable digital amp that had tubes in it, with a separate rack-mounted EQ. I remember blending that thing with the Boogies for lead sounds and clean sounds. The clean sound on 'One' was done almost exclusively with the ADA MP-1."

In a separate 2013 interview with Guitar World Lamb of God guitarist Willie Adler picked …And Justice for All as the album that changed his life.

Said Adler: “I started playing guitar when I was 11, a year before ...And Justice for All came out. I had been jamming on Aerosmith tunes, 'cause that's what my brother listened to. then I got my first Slayer record, followed by the first three Metallica albums: Kill 'Em All, Ride the Lightening and Master of Puppets. I already thought of Kirk Hammett and James Hetfield as the ultimate guitar duo, but when Justice came out, it floored me. It had a classical vibe to its movements and arrangements and turned me on to metal's ability to be epic.

“...And Justice for All totally influenced my songwriting and made me attempt to write more complex songs,” Adler continued. “It's epic, fast and in your face, yet so complex. A lot of bass players might get mad that I chose this record, 'cause you can't hear the bass on it, but it's an extremely pivotal record for me. When I sit down to write, I still think about the way Metallica put that album together and got away with six- and seven-minute songs. ...And Justice for All prove to me how truly amazing metal can be, that it is completely different from every other type of music and has the ability to transcendent any kind of style and be beautiful.”