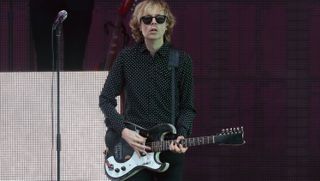 Beck has played a variety of guitars over the years, including Schecter, Fender and Harmony electrics, and he even has his own impressively spec’d limited edition Martin signature model.

But as he recently told the New York Times, there’s one very humble electric guitar that is central to his music: a Silvertone 1448.

“It’s a cheap guitar from the Sears catalog, basically made out of particle board,” he said. “It’s not considered remotely in the pantheon of great instruments; it’s sort of looked down upon by real musicians. I think I bought it for about $60.”

These days, Beck continued, he has “dozens of incredible, classic guitars.”

But, he said, “I keep going back to this one that’s supposedly not so good. It barely stays in tune. But it just has this sort of rickety sound - beautifully hellacious, but also a little broken and tender.

“I’ve recorded so many of my albums with it. I’ve been playing it my entire career.”

Just goes to show you don't need to spend much cash to get a great guitar...