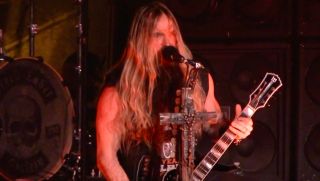 Black Label Society will release Sonic Brew - 20th Anniversary Blend 5.99 - 5.19, a “reimagined” version of their 1999 debut, Sonic Brew, on May 17. In conjunction with the release, the band has announced the "20 Years of Sonic Brewtality Tour," a new 2019 North American outing.

Said Black Label Society leader Zakk Wylde of Sonic Brew, “The original recording back in 1997 was mastered with high volume, alcohol and dance. We went in and worked off the existing performances and focused on the high volume and dance while replacing the booze with viagra and anabolic steroids.”

The new “re-blended” version of Sonic Brew will feature two bonus tracks, a full band/piano version of “Spoke in the Wheel” and an acoustic take on “Black Pearl.”

For the upcoming tour, Black Label Society will play two shows in each market—the first night will feature Sonic Brew in its entirety, while the second date will see the band play a set of greatest hits. Support will come from Conan and the Atomic Bitchwax. Dates begin April 24 at the Oriental Theater in Denver and wrap up in Los Angeles at the El Rey Theater for two nights ending on May 23. See below for all shows.

For more information, head over to BlackLabelSociety.com.