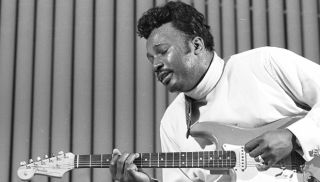 Seminal Chicago blues guitarist Otis Rush died on Saturday from complications of a stroke he suffered in 2003. Rush was 84 years old.

Masaki Rush, his wife, released a statement on his official website: “Known as a key architect of the Chicago ‘West Side Sound' Rush exemplified the modernized minor key urban blues style with his slashing, amplified jazz-influenced guitar playing, high-strained passionate vocals and backing by a full horn section. Rush's first recording in 1956 on Cobra Records 'I Can't Quit You Baby' reached #6 on the Billboard R&B Charts and catapulted him to international acclaim. He went on to record a catalog of music that contains many songs that are now considered blues classics.”

Rush's solo style was characterized by a wide vibrato that was a product of his unusual approach—like Albert King and, after him, Jimi Hendrix, Rush was a lefty who played a right-handed guitar flipped over and upside-down, with the low E string on the bottom and the treble strings on top. He explained the effect that had on his sound to Vintage Guitar in a 1998 interview:

“See, when you play lefty, (upside down right-handed guitars), you’re pulling that vibrato down to the floor,” he said. “That makes things a lot easier in terms of pressure and control. It only makes sense. It’s a lot less stress to tear a house down than to build it up, right?

“Pulling down makes more sense, to me anyway, and I can work it stronger and get it to sustain better. ‘Course, besides all that, I kinda like doing things backwards, anyway.”

Rush, who played a Strat in his early days before shifting to semi-hollowbody guitars like the Gibson ES-335 later on, and continued to record into the Nineties and tour until roughly 2000. He was elected to the Blues Hall of Fame in 1984 and won a Grammy for Traditional Blues Recording in 1999 for his album Any Place I'm Going.

For all his accomplishments, he was never as widely known as other electric blues legends like B.B. and Albert King. But his influence extended far and wide. Stevie Ray Vaughan named his backing band Double Trouble after Rush’s 1958 song (which also feature Willie Dixon on bass and Ike Turner on second guitar) of the same name.

Across the pond, Eric Clapton was another Rush acolyte, covering “Double Trouble” numerous times throughout his career, including in the studio on his 1976 album, No Reason to Cry, and onstage for 1980’s Just One Night. (The Paul Butterfield Blues Band and John Mayall and the Bluesbreakers took stabs at the minor-key blues as well).

Another Rush song, the Afro-Cuban-tinged “All Your Love (I Miss Loving)” was covered by everyone from Stevie Ray Vaughan, John Mayall and Buddy Guy to Aerosmith, Gary Moore and Steve Miller. Carlos Santana once pointed out that “Black Magic Woman,” written by Fleetwood Mac’s Peter Green and made famous in America by Santana, owned more than a debt of gratitude to “All Your Love” in its rhythm.

But perhaps the most famous cover of an Otis Rush song is Led Zeppelin’s version of “I Quit You Baby,” which appeared on their 1969 self-titled debut, and then again in live form on 1982’s Coda.

"[A]ll those English cats, they were just babies when this was going down, and it hit them hard,” Rush told Vintage Guitar. “You could say that music changed all of their lives. But I was there, man. I saw it and felt it and set out to capture that ability to transform your life through song.”