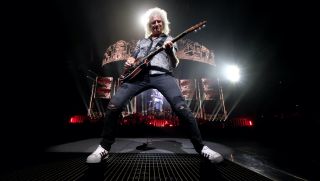 Remember the video of the quarantined Italian citizen channeling his best Brian May by blasting the electric guitar solo from Queen’s We Will Rock You out into the world from his balcony in Rome?

Well, now the real Brian May has gotten in on the action.

There hasn’t been much good news coming as a result of the coronavirus pandemic, but May has offered at least some respite from the daily onslaught of frightening information with his “MicroConcerto” video postings on his official Instagram page.

After posing a question to his audience, “What would you like me to play?,” in one of these installments, the answer came back:

“The one that probably was asked most of all was the solo that goes in the middle of that very complex tune written by Freddie [Mercury] called Bohemian Rhapsody,” May says.

This spontaneously turned into a ‘Star Licks’ type tutorial ... as an experiment, really. I don’t think I’ll Ever try to do it this way again, though - because it was ridiculously time-consuming trying to put it all up on IG ‘Stories’. Here’s a very rough potted version for posterity. Tell me how useful (or not!) it was. OK ? Bri Brian Harold May

And with that May, with Red Special in hand, tears into the iconic solo and then breaks it down step by step, which you can see in the accompanying video.

As for what kind of gear he’s using for the MicroConcerts?

“The answer is not very much, because I can’t get into my studio at the moment,” May says.

“I’m taking the self-isolation thing very seriously, as I think you have to in order for us to stand a chance of keeping this virus in check.”

The Red Special he is playing, he explains, “is straight off the production line of Brian May Guitars, and I signed it and then I realized I really liked this one. This one has a particularly beautiful grain so I’m going to keep this one for a while at least and play with it.”

From there, May trains his iPhone camera on a Vox Mini5 Rhythm five-watt modeling amp. “It’s very small but it does lots of stuff,” he says.

“It’s got a lovely selector [switch] which sort of tunes you from 1970s to the present day," May continues.

"I’m actually on California Metal at the moment  which means that Queen must have been well ahead of their time.”

The only quintessential piece of May gear missing from the performance? His famous six-pence plectrum.

“I use the fingernail now a lot more and tonight it just seemed appropriate," May explains.

“It gives me a lot of control on the sound and the feel.”

For more MicroConcertos, head to Brian May For Real on Instagram.