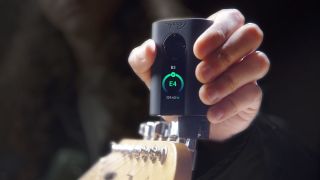 Band Industries has announced a Kickstarter campaign for its latest automatic guitar tuner, the Roadie 3.

The new tuner follows the 2017 release of Roadie 2, which was, according to the company, the most funded music accessory in the history of crowdfunding.

The updated Roadie 3 features a motor twice as fast as its predecessor, reaching a speed of 120 RPM.

The unit also comes with as many as 100 built-in tunings and the ability to create your own alternate tunings.

String changes have also been upgraded, with Roadie 3 able to wind new strings to tension and tune them in one step.

Other new features include a more compact design, a larger, full-color high-resolution display screen with a 135 x 240 pixel matrix, increased visibility and dynamic display of the strings’ frequency, and a vibrating metronome.

Band Industries is offering Roadie 3 at a “super early bird” discounted price of $89, available only to those who pledge their support through the Kickstarter campaign in the first few hours.

For more information on the Roadie 3, which has already surpassed its pledge goal, head over to Band Industries’ official Kickstarter page.