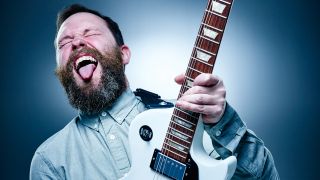 Scientists are claiming a new cream can help people learn to speak new languages – and also play musical instruments like the electric guitar.

According to an article in The Mirror, the team behind 'neurohacking' cream dihexa, developed by experts at Washington State University to fight Alzheimer's disease, made the claim.

Dihexa, which is current available in the US, combats Alzheimer’s by “slowing cell death and suppressing enzymes which wipe out chemicals used for memory and learning.”

In an interview with the Telegraph, Dr Daniel Stickler, who represents biotech company Apeiron, said that in the US, "We have a very large percentage of people who think, 'I know I'm good but I want to get better.'

“If you’re learning to play the guitar or something, it’s really good for creating that kind of mental response."

So far, trials have shown the drug - which is set to go on sale within five years - can improve concentration, mood and memory - although we'd say just learning the guitar has a similar effect.