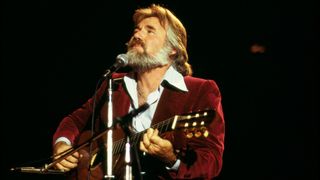 The news was announced in a statement from Rogers’ family, which said he “passed away peacefully at home from natural causes under the care of hospice and surrounded by his family.

“In a career that spanned more than six decades, Kenny Rogers left an indelible mark on the history of American music. His songs have endeared music lovers and touched the lives of millions around the world.”

Rogers won three Grammy awards during the 1970s and ’80s, and was best known for The Gambler, released in 1978. Other hits included Lady, Islands In The Stream, Lucille, She Believes In Me, and Through the Years.

The Houston, Texas-raised singer was inducted into the Country Music Hall of Fame in 2013, and retired from touring in 2017, aged 79, after six decades in the music industry.

In a social media tribute, the Country Music Association said Rogers had “forever left a mark on country music’s history”.

Rogers’ family will hold a small private service in light of the COVID-19 crisis, and plan to hold a public memorial at a later date.

Country Music has lost the great Kenny Rogers, who has forever left a mark on Country Music's history. His family and friends are in our thoughts during this difficult time. pic.twitter.com/tKPXUXU2kpMarch 21, 2020