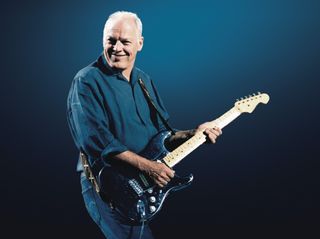 Thursday's highly anticipated auction of David Gilmour's guitar collection rocked the guitar world from the get-go — and it just kept on going from there. In all, the sale — dubbed "The David Gilmour Guitar Collection" — brought in a total of $21,490,750, with all proceeds benefiting Client Earth. Bidders from 66 countries took part in the action.

But the undisputed star of the auction was Gilmour's legendary 1969 Black Strat, which took in a mammoth $3,975,000 late in the day, establishing a new world auction record for any guitar sold at auction — ever. This is, of course, the "David Gilmour guitar" — the axe heard on “Comfortably Numb,” “Shine on You Crazy Diamond,” “Money” and so many other classic tracks. The guitar has gone through many modifications over the decades, which has only added to its mystique. With its battle-scarred surface, it wouldn’t be hard to believe it had been to The Dark Side of the Moon and back. And in some ways, it had, appearing on that album, as well as many others in the Floyd catalog.

Speaking of Fender products, Gilmour's Olympic White "#0001" Stratocaster took in $1,815,000 after a four-minute bidding war early in the day. He used it on The Wall, most famously on the funky rhythm part on “Another Brick in the Wall (Part 2).” While some of this axe’s history is foggy (although most stories seem to involve a young Seymour Duncan), Gilmour is clear as to why it was special to him: “Some guitars make everyone sound the same. Others tend to emphasize the differences, which this one does.”

His Candy Apple Red 1984 Fender Strat brought in an impressive $615,000, much higher than its $25,000 estimate. It can be heard throughout much of A Momentary Lapse of Reason and The Division Bell. In other Fender news, a lesser-known Black 1984 Strat that was once played by George Harrison sold for $212,500.

“[Parting with the guitars] is something I’ve thought about for years,” Gilmour told Guitar World earlier this year. “These guitars have served me very well. They’ve given me songs and tunes, but I thought it would be good for them to move on and create new music with different people. Hopefully, they’ll also raise a fair bit of money, which I plan donate to charity, and that will do some direct good in this world with all its difficulties.”

To read more about five highlights of the collection, step right this way.