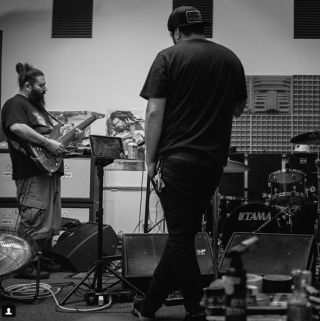 The Deftones have remained mostly quiet about the status of their upcoming studio album, the follow up to 2016’s Gore. But over the weekend they dropped a few hints about their progress on their official Instagram page. Four photos—one of a smashed-to-bits ESP six-string, another of guitarist Steph Carpenter playing an (for the moment, at least) intact ESP, a third of bassist Sergio Vega with one of his many Fender Jaguar basses, and a fourth of frontman Chino Moreno playing a Knaggs guitar, were posted in succession. Several include the hashtag, #thespot, name of the band’s studio in their hometown of Sacramento.

Though there has been no talk of when a new album might be out, Moreno gave an interview to Argentina’s rock.com this past May where he said of the new material, “There are six or seven songs, which are still mutating.” As for when he thought the record might be released, Moreno said, “It's a complicated question, because we do not have a definite idea or a deadline. We are only composing, taking our time and seeing where the material takes us.”

In the meantime, Deftones will be appearing at the Louder Than Life Festival in Louisville, KY on September 30, with dates at Austin City Limits and the Monster Energy Aftershock Festival in Sacramento to follow.