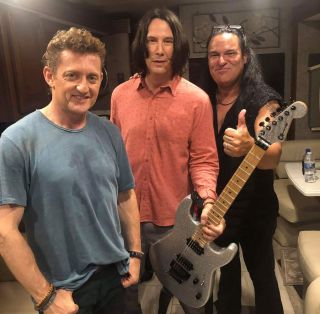 You’ve surely heard the triumphant news that Generation X icons Bill & Ted are returning for a third film, in which the electric guitar will surely feature heavily, and now it seems one of the movie’s central axes may have been revealed.

A now-deleted photo on Instagram finds the movie’s stars Keanu Reeves and Alex Winter in possession of a Charvel electric with a most bodacious finish indeed.

The shot of the glitter silver flake sparkle SuperStrat was shared by New Orleans guitarist Andrew Autin, who gave the boys a crash course in on-camera shred, before sharing a quick video that showed off the guitar’s resplendent finish.

Reeves is an accomplished bassist in real life, of course, having played in LA alternative-rock band Dogstar during the ’90s and ’00s, so we imagine he didn’t need too much tutelage to deliver some excellent solos.

Notably, the Charvel in question is a San Dimas Pro Mod - that’s particularly pertinent since it’s where Bill and Ted attended high school (or at least they did when they weren’t bunking off to hone the musical stylings of the Wyld Stallyns). Surely that’s no coincidence...

The plot of next year’s Bill & Ted Face The Music centers around the titular duo’s quest to write a song that will save the universe - could this Charvel be the vehicle to help them do just that?

We’ll find out when the film is released in August 2020 - until then, be excellent to each other.