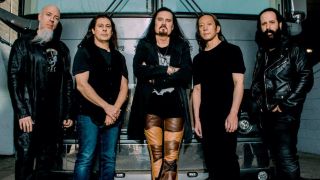 There’s arguably no act in modern rock and metal with deeper ties to the Berklee College of Music than Dream Theater, given the school is where electric guitar player John Petrucci, bassist John Myung and ex-drummer Mike Portnoy first formed the band as students in 1985.

Now, in celebration of their 35th anniversary, Dream Theater have partnered with Berklee for the Dream Theater Scholarship Fund, which will provide scholarship money to student musicians in need.

Recently, Petrucci and his wife Rena, who completed an online Advanced Guitar Certificate (their son, Reny, graduated from Berklee in 2018), met with Berklee president Roger Brown to discuss details of the scholarship.

Said Brown, “Dream Theater has been a tremendous influence on the progressive metal scene, achieving worldwide success for their dedication to excellence in music.

"The Dream Theater t-shirt has been the most popular item of apparel on our campus for years, and many students have chosen to come to Berklee as a result of the band's legacy. We are so appreciative of Dream Theater's support.

In addition to Petrucci and Myung, current drummer Mike Mangini served as a drum professor at Berklee for 11 years before joining Dream Theater in 2010.

Additionally, the band performed with the Berklee Orchestra and Berklee Concert Choir, with Berklee student Eren Basbug conducting and arranging, at the Boston Opera House in 2014. That concert was released as the live album and video Breaking the Fourth Wall.

For more information, head to Berklee.