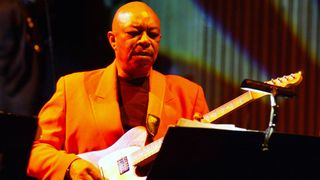 Eddie Willis, guitarist and founding member of Motown's house band, The Funk Brothers, has died at the age of 82. Willis had been suffering complications from his lifelong battle with polio.

The guitarist, nicknamed "Chank," joined the Motown house band in 1959, and lent his inimitable, muted guitar style to Motown hits like The Marvelette’s “Mr. Postman,” the Supremes’ “You Keep Me Hangin’ On,”  the Temptations’ “The Way You Do the Things You Do” and Stevie Wonder’s  “I Was Made to Love Her” and “My Cherie Amour."

“He was the funkster, Eddie was,” fellow Funk Brother Dennis Coffey told Billboard.  “He was an amazing guitar player. He had that Southern thing. He’d always come up with some funky lines. We did many sessions together and he was just an all-around nice guy. I never heard him get angry at anybody about anything. He just came in and did his job.”

Though Willis remained with Motown when the label moved to Los Angeles, he left the label and returned to Detroit in 1972. The guitarist also toured with The Temptations' Eddie Kendricks and spent two decades with The Four Tops.

In 2013, Willis—along with the other surviving Funk Brothers—received a star on the Hollywood Walk of Fame.

You can hear some examples of his greatest guitar work below.