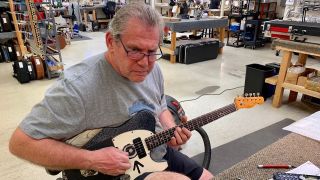 Mike Lull, founder of Mike Lull Custom Guitars & Guitarworks, has died aged 65, according to a statement posted on the company’s Facebook page.

The post reads, “It is with tremendous sadness that we share that our great leader and company’s founder, Mike Lull, unexpectedly passed away on the 12th of February, 2020.

“Mike was a visionary and inspiration for the music community, and he left his indelible mark on every instrument he ever touched and every customer he ever helped. In fact, Mike never considered anyone ‘customers’; they were all his friends.

“Mike’s dedicated staff and family will be carrying on his legacy as this is what Mike wanted.”

Based in Bellevue, Washington, Lull opened Mike Lull’s Guitar Works in 1976, after six years of repairing guitars in a local store.

His talent for repairing, modifying and building instruments saw him held in high regard, particularly among the burgeoning Seattle scene.

Lull’s services were frequently sought out by the likes of Heart, Soundgarden, Nirvana, Death Cab For Cutie and Pearl Jam, the latter of whom have paid tribute to the respected luthier.

“Mike built my first bass in 1988, a fretless made of scrap heap Warmouth seconds, which he turned into the best bass I had ever owned to that point,” said bassist Jeff Ament.

“Since then, we collaborated on over 30 instruments, all made with his beautiful and meticulous touch. I can't tell you how lucky all of us Seattle musicians were to have, not only the best luthier, but also one of the best humans on the planet in our backyard.”

Guitarist Stone Gossard echoed Ament’s sentiments, stating, “Thank you Mike for all the love and attention you gave to our band and our instruments for the last 30 years. Thank you for your kindness and expertise, your dedication and love. We have been spoiled by your talents and humanity.”