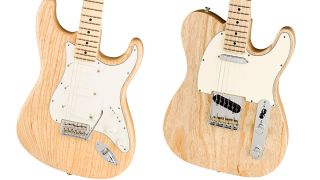 Fender first unveiled its American Performer Series in late 2018, and now the company has added to the line with the limited-edition Raw Ash Stratocaster and Telecaster electric guitars.

Like all American Performer models, the new guitars boast Yosemite pickups and a Greasebucket tone circuit, which makes it possible to cut treble without loss of gain or clarity.

The Tele comes with a thru-body Fender six-saddle Tele bridge, while the Strat swaps in a six-point synchronized tremolo.

For more information on the American Performer Series, head to Fender.