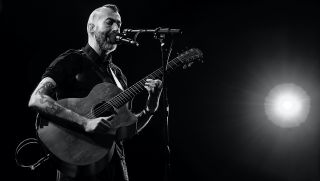 Now Gomm, who recently signed to Kscope Music, has recorded a new version of Passionflower for Spotify, and to mark the release he’s performing a concert from his home studio and streaming it live.

Tickets for the show are pay what you want. “If you're struggling through lockdown, don't feel bad about paying nothing,” he says. “I'm in the same boat.”

The performance will take place June 14 at 12:15pm PST/8:15pm UK, and according to Gomm, “The audio will be HD and I'll set up a live chat on the page, so you can ask questions / request songs / heckle me mercilessly.

“The gig will be saved on the stream page for a week afterwards, in case you miss the live stream, but you'll only be able to access that if you have a ticket.”