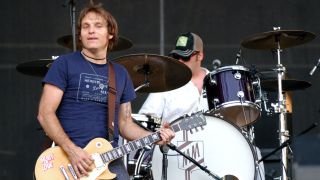 Former Supersuckers electric guitar player Ron “Rontrose” Heathman, who was a part of the band’s classic lineup, has died. His passing was confirmed by the Supersuckers on Facebook, writing, “Rest in peace brother Ron. We’ll post more once we process this.”

No cause of death has been reported as yet.

Posted by supersuckers on

The band formed as a straightforward punk unit, the Black Supersuckers in 1988 in Tucson, Arizona, and the next year they relocated to Seattle, with Spaghetti taking over on vocals. They recorded a series of early singles, including offbeat punk covers of songs like Madonna’s Burnin’ Up and the Flamin Groovies’ Second Cousin, and eventually landed a deal with Sub Pop Records.

While Heathman was a part of the band’s classic era, which saw them mix punk with more traditional rock ‘n’ roll, he left in 1995 and was replaced by Rick Sims, just before the band began to garner some mainstream attention with their third album, The Sacrilicious Sounds of the Supersuckers.

Heathman returned in time for 1997’s Must’ve Been High, on which the Supersuckers took a hard turn toward their now characteristic cowpunk sound, and remained with them for the next decade, appearing on 1999’s The Evil Powers of Rock ’n’ Roll, 2003’s Motherfuckers Be Trippin’, 2006’s Paid and 2008’s Get It Together.

The band then went on haitus, and when they reformed for 2014’s Get the Hell, Heathman had been replaced by guitarist “Metal” Marty Chandler.

Around the time of Get It Together, Heathman was asked by Reverend Guitars for any advice he had for up-and-coming players.

“Be yourself, for better or worse,” he said. “Find your own sound. Borrow from the greats but make sure you find your own voice on the instrument and play from the gut. Phrasing is everything, perfection is boring!”