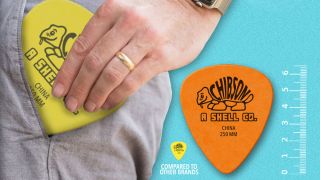 Given the current state of the world, some might argue it’s no time for April Fools’ Day - but if you ask us, we could all do with a laugh.

Thankfully, the guitar community has obliged, and served up a handful of six-string screamers. And one of them is for charity! Right on.

Below, we’ve rounded up some of our favorites from the web.

If you don’t already follow Chibson on Instagram, we positively implore you to press the button: it’s the source of the internet’s finest pun-based guitar Photoshops, and now the beloved brand has partnered with Reverb for its first actual product, the Hand Pick.

Designed to tackle the problems that accompany traditional plectrums - namely getting lost in your acoustic or laundry - the Hand Pick is six times larger than other picks, with a 250mm thickness, so there’s no chance of losing it. Like, at all.

It’s available now for $9.99 from Reverb, and all proceeds will be donated to the MusiCares Covid-19 Relief Fund. Which is really quite awesome.

Pedalboards are getting bigger by the day, but Marshall took it to the limit this year by offering up a 46(!)-channel footswitch.

Options span the usual clean, crunch and OD, on to every effect you can think of (including More Reverb! and Too Much Reverb!!), but after that, things start to get a little… weird.

Our favorites? Do Not Press, More Talent and, of course, More Cowbell. An essential, really.

“Saddle the unicorn and ride the rainbow with this ultimate shred machine!” reads the Ibanez Germany listing for this special edition of the FR800.

The model is spec’d as per the regular FR800, with a number of one-off tweaks: namely that Pink Flat finish and unicorn inlay. Oh, and the Wizard III roasted maple neck smells like popcorn, apparently.

Call us crazy, but if this were real, we think it would sell like hot, horned cakes. NAMM 2021?

Boss Europe posted this snap up on Instagram with no description whatsoever, which is pretty cryptic, even on April Fools' Day.

Nevertheless, it's safe to assume this set of four plug-in tubes for the company's normally tubeless Blues Cube Tour head is almost definitely a hoax. Particularly when its Tube Logic technology does such a good job of replicating tweed-era response already, without resorting to heating up any glass bottles.

The most in-depth Nigel Tufnel solo analysis ever

We’re not ones to miss out on an opportunity for japes, so today, Guitar World published a 4,000+-word essay on the genius of Nigel Tufnel’s Trademark Solo - you know, the one where he scrapes an actual violin on the strings of a guitar.

In the mammoth undertaking by jazz guitarist and Indian classical musicologist George Howlett, you can learn how Tufnel’s solos draw on myriad musical backgrounds to forge their formidable sonic barrage.

Seriously, there are actually some academic-level learnings to be had. Or you can just watch the video again and have a good laugh. You’d be forgiven.