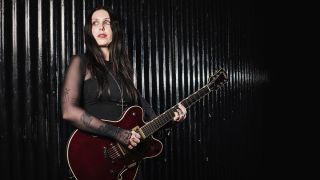 With the vast majority of the world still in uncertain waters due to the coronavirus, it's incredibly comforting - in our digital age - to be able to hear new music, and know that at least some aspects of the world we used to know are still operating as they once did.

Guitarists across the industry are still taking the forced downtime induced by the pandemic to revisit and flesh out old material and create new art for us fans to enjoy.

To that end, this week saw as eclectic a bunch of killer new guitar songs as ever. From a coronavirus-busting anthem from Alice Cooper, to a perfect slice of gothic hard-rock from Mrs. Piss, to an archival gem from Neil Young, there's bound to be something here that fits your particular taste.

So plug in, turn up the volume and enjoy the week's finest, most innovative guitar performances.

For anyone who missed Chelsea Wolfe’s heavier, sludgier side after Birth of Violence's return to earthier acoustic territory, this new collaboration with drummer Jess Gowrie is just the tonic.

Doomy chugs, ethereal vocals and massive distortion sounds are the order of the day, summoning the menacing timbres that fueled Wolfe’s Abyss and Hiss Spun records. A full-length LP, Self-Surgery, lands on May 29. We can’t wait. (MAB)

Alice Cooper - Don’t Give Up

The king of shock-rock might not be the first person you turn to for reassurance in the time of a pandemic, but Mr Cooper may just have delivered the feelgood message we need right now.

Don’t Give Up was produced remotely, with band members filming their parts while isolating at home. The single sounds huge, with Nita Strauss and co delivering waves of chunky powerchords and a classic-era Alice riff. It also serves as a reminder that Cooper really does have a lovely motivational speaking voice. (MAB)

A veteran of The Kills and the Dead Weather, Allison Mosshart has lent brooding, captivating vocals to more than enough amazing tunes to warrant her own time in the spotlight. Even though her latest single, It Ain't Water, is only her second solo song ever, Mosshart's breadth of musical experience gives it the power of a piece of music that knows exactly what it wants to be.

Replete with the haunting vibes and spare, acoustic instrumentation of Johnny Cash's late-career, Rick Rubin-produced albums, this track is a masterclass in making a towering song with relatively few ingredients. Driven by stunning instrumentation courtesy of jack-of-all-trades Alain Johannes, it's a song that stays with you long after its final notes gently play themselves out. (JM)

Avatar - Silence in the Age of Apes

Swedish heavy metallers Avatar are known for the lavish circus-esque stage outfits, but perhaps even more so for their pinpoint fretwork.

Effektology seems a particularly apt name for the latest track from one of the leading pedal soundscapists in guitar today.

Returning to her instrumental solo material after high-profile gigs with Iggy Pop, Sarah Lipstate employs dense, lush pitch-shifting to conjure otherworldly textures reminiscent of Brian Eno at the height of his ambient powers, but there’s a real sense of movement and progression here that keeps Effektology rooted in popular song. Spellbinding stuff. (MAB)

The acclaimed Scottish trio treat us to another single from their upcoming ninth studio album A Celebration of Endings. The six-string techniques used on this track are tried and tested, but for that very reason they work wonderfully.

Tiny Indoor Fireworks is musically fairly simple, but undeniably feel-good, and serves as a welcome dose of optimism during these troublesome times. (SR)

On the latest track to be taken from forthcoming full-length Consummation, the NYC singer-songwriter delivers tremulous guitar passages over a brooding synth bassline.

The dark tone mirrors the themes espoused by her upcoming album, based on an alternate interpretation of the abuse subtext in Hitchcock’s Vertigo. That’s some highbrow subject matter, but the ways in which Von Schleicher combines square-wave synths and myriad guitar textures are just as smart. (MAB)

Though the coronavirus has seen musicians of all stripes go through their archives and dust off some unreleased gems, it's still hard to believe that even these strange present times will finally - after 45 years - see the release of Neil Young's near-mythical shelved 1975 album, Homegrown.

Try, the first taste of the record, is anchored by yearning, cooing pedal steel cries, lovely backing vocals from Emmylou Harris, Levon Helms' ever-flawless drumming and Young's own pristine, evocative strumming and moving, plainspoken lyrics. As immaculate a three-minute piece of country-folk perfection as anything on his blockbuster 1972 album, Harvest, Try has us counting down the days until this archival treasure is released in full. (JM)

From the Guitarist of the Year 2018 winner Gabriel Cyr comes a new EP, Spectrum Exploration I. If you’re wondering what led Cyr to be endowed with such a prestigious title, the record’s first track - the aptly titled Dark Times - will answer any such questions.

The instrumental track sees the guitarist effortlessly traverse the fretboard, showcasing his fluency of theory as he confidently plays around with different scales and phrasing techniques. (SR)

Everyone’s favorite UK-based wonky-pop exports are back with a new album - Re-Animator - and a renewed sonic approach that pushes harmonies and melodies to the forefront, ahead of synths and programming.

Arch Enemy proves there’s plenty of mileage in the formula, with its intricate guitar fills and runs receiving a host of inventive deliveries, and even affording a tasty alternate-picking section at the track’s close. It’s a superb exercise in how to make unconventional guitar tones work perfectly in a mix. (MAB)