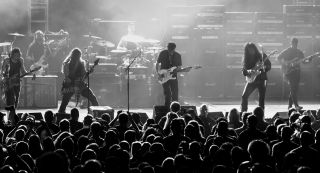 "Highway Star" is taken from the group's upcoming live album, Generation Axe—The Guitars That Destroyed the World: Live In China.

Collecting performances from the tour’s 11-city run in Asia in 2017, the album is set for a June 28 release via earMUSIC. To preorder the album, step right this way.

“For me, I might say that our arrangement and performance of 'Highway Star' captures a good essence of what Gen-Axe is about," Vai told Guitar World. "In this song we all came together and worked out a spectacular five guitar arrangement of this classic masterpiece, with an interplay of harmonies that is uniquely structured and potent.

"There are shifting solo sections tailor made for each guitarist, and a deep respect to the structure of wicked fast harmonies engineered around Richie Blackmore’s historic solo. And then there’s Yngwie’s powerful vocal performances on this track too. It has a high degree of rock and roll energy in it.”

You can check out the album art and tracklist for Generation Axe—The Guitars That Destroyed the World: Live In China below.

For more info on the group, head on over to generationaxe.com.

4. Nuno Bettencourt - A Side of Mash