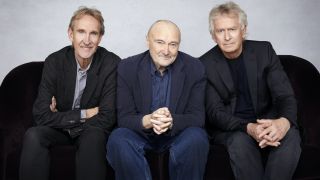 Genesis have announced they are reuniting 13 years after they last played onstage together.

The Last Domino? Tour 2020 will see singer Phil Collins, electric guitar player Mike Rutherford and keyboardist Tony Banks revive the trio format of the band, which rose to become one of the biggest-selling rock acts of the Eighties, for a series of arena shows throughout Ireland and the UK.

The dates will be their first live gigs together since 2007’s Turn It On Again: The Tour. Joining the trio on the run will be longtime associate Daryl Stuermer on guitar and bass and Collins' 18-year-old son Nic on drums.

The announcement comes following Collins’ reveal several years ago that he was no longer able to play drums due to nerve damage. “My hands don’t really do what I want them to do,” he told Rolling Stone.

Genesis are delighted to announce that @tonybanksmusic, @PhilCollinsFeed and #MikeRutherford will be touring the UK in late 2020! Tickets go on sale on Friday at 9am. More info here https://t.co/L0KvJuBNRw #lastdomino pic.twitter.com/X2RodjlpkJMarch 4, 2020

In 2011 he publicly retired from music to focus on family life, but came back a few years later for the massively successful Not Dead Yet tour, which saw him perform seated in front of audiences.

The reunion with Rutherford and Banks will kick off November 16 in Dublin and wrap December 11 in Glasgow. As of now, no North American shows have been announced.

The full list of dates is below, with a general on-sale beginning March 6 at Live Nation.