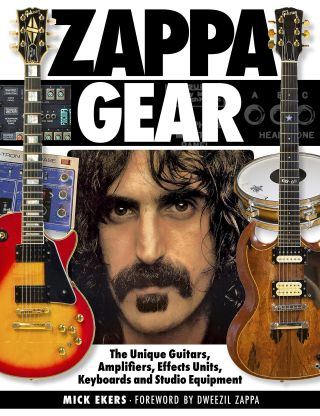 A new comprehensive book chronicling Frank Zappa’s guitars and other equipment will be released on November 29.

Titled Zappa Gear: The Unique Guitars, Amplifiers, Effects Units, Keyboards and Studio Equipment, the tome was written by Mick Ekers, with a foreword from Dweezil Zappa.

In addition to covering guitars, amps and more – everything from Zappa’s Marshalls and Gibson SGs to his wah-wah pedals and Synclavier – in incredible detail, Zappa Gear discusses some of the inventors, engineers and entrepreneurs without whom the musician’s particular, often modified equipment wouldn’t have existed.

The book also includes over 180 photographs of Frank’s guitars and gear taken by the author at Zappa's UMRK studio in Los Angeles.

Zappa Gear will also be joined by a second tome, The Hot Rats Book, by Bill Gubbins and Ahmet Zappa, due December 15.

The deluxe, commemorative offering celebrates the 50th anniversary of Zappa’s Hot Rats albums and boasts never before-seen photos from Gubbins, the only photographer to document the album sessions, as well as an interview between Gubbins and Ahmet Zappa.

Both Zappa Gear and The Hot Rats Books were produced and written with the full cooperation of the Zappa Family Trust.

Said Ahmet, "These books provide another way for fans to connect with Frank Zappa. They give a fascinating window into Frank's mind and the ideas he came up with throughout his career."