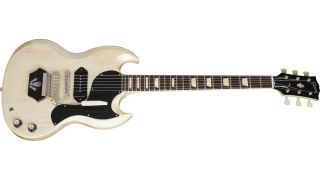 After previewing the Brian Ray ’62 SG Junior at Summer NAMM, Gibson has now released the full details of the guitar, and it’s a stunner.

The new model, designed in conjunction with the Paul McCartney guitarist, expands on Ray’s ‘63 SG Standard with a combination of classic features and modern, but decidedly analog, innovations.

At its base, the guitar boasts a solid mahogany body with a mahogany neck and Indian rosewood fingerboard. But even here there are some cool modifications—the body is an eighth of an inch thicker than a standard SG, which Ray says “offers more low and mid-range punch to the overall tone,” while the neck features a long tenon and is fitted to the body with hide glue. The fretboard, meanwhile, boasts a custom crown inlay at the 12th fret.

Other features include a single dog-eared P-90 at the bridge and a passive “induction coil” circuit hidden under the pickguard that, when engaged by a push/pull on the tone knob, reduces RF interference and high-gain noise. Furthermore, there’s a convertible bridge design that gives players the choice between a tune-o-matic ABR-1 or wrap-tail bridge and a Vibrola tremolo or stop bar tailpiece setup. According to Gibson, the bridge can be optioned “in the time it takes to change strings.”

The new signature SG Junior is finished in White Fox with nickel hardware and a three-ply black/white/black pickguard, and is available for $4,199.