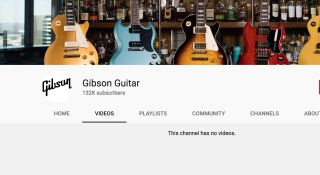 From the now-infamous Firebird X destruction video to the company's own Play Authentic missive, Gibson has had a... shall we say, colorful, year on YouTube. Now though, in a tantalizing development, the guitar giant's YouTube presence appears to have been erased completely.

A look at Gibson's YouTube channel reveals that the company's presence on the platform, including all of its videos, has been completely wiped out. The presence of Gibson Entertainment, a channel run in tandem with Gibson Guitar, has also been completely erased.

Even more interestingly, Epiphone's YouTube channel appears to have been left unscathed by this development, with all of its videos still live and intact.

Though Gibson has done much in 2019 to rehabilitate its post-bankruptcy image - with an impressive showing at this year's NAMM show and a new, streamlined lineup of instruments - the storied company ran into controversy in June with the release of its Play Authentic video on YouTube.

Featuring the company's newly hired Director of Brand Experience, Mark Agnesi, the video was a thinly veiled threat to other guitar manufacturers specializing in Gibson-esque designs. Upon its decidedly poor reception, the video was pulled within days of its release.

Though Gibson, of course, followed through on its threats, it's unclear why the brand has erased its YouTube videos specifically, as its Facebook and Twitter pages appear to be untouched as of now.