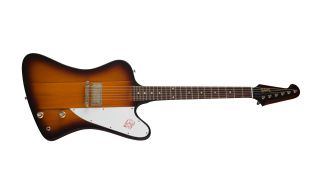 Gibson has unveiled some rather impressive signature electric guitar models of late, but the company’s newest creation, the Eric Clapton 1964 Firebird I, is arguably the most awe-inspiring of the lot.

A reissue of Clapton’s original Cream-era Firebird, the limited-edition guitar, according to Gibson, was developed using authentic construction methods and precise dimensions scanned from vintage ’64 models.

While Clapton is associated with other Gibson designs like the ES-335, Les Paul and SG, the Firebird holds a special place in his history as well. In a statement he said, “I remember one night in particular with the Firebird. It was a Cream show in Philadelphia and it was one of the greatest gigs I ever played.”

Features on the 1964 Firebird I include a mahogany body with an Authentic ’64 Medium C-Shape nine-ply mahogany/walnut neck and Indian rosewood fingerboard.

Gibson Chief Merchant Officer Cesar Gueikian told Guitar World, “We built the first prototype and sent it to Eric and he was over the moon. He remembered it as being just like his original. That’s the highest compliment we could ever receive.”

The Eric Clapton 1964 Firebird I comes in a Vintage Sunburst finish, with a replica of the strap Clapton used with the guitar, a replica of the original case and a Certificate of Authenticity.

The extremely limited edition guitar will be produced in a run of 50 models that will be sold through Guitar Center and another 50 through select international Gibson dealers. Presale begins today, August 20, with an MSRP of $11,762.

The Firebird will also be on display at the Crossroads Guitar Festival in Dallas on September 20 and 21, in the Guitar Center Village alongside the Gibson ES-335 Clapton used to record Cream's version of Crossroads, among other songs.