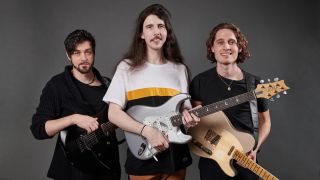 Earlier this year, we played host to a search for the best electric and acoustic guitar players the world has to offer - and now the results are in!

Finalists came from  Japan, Brazil, Australia, Switzerland, Italy, France, the US and the UK to compete, while each player was judged on technicality, originality, musicality and feel. The winners walked away with prizes from Orange, Ernie Ball, Takamine and PRS Guitars.

Now, without further ado, here are the Guitarists of the Year 2019, complete with their jaw-dropping video entries and a few quotes from the winners themselves.

“I've been playing about 11 years now. So I started when I was in grade 7, so from primary school, and then I did a bachelor's degree in jazz guitar. I finished that last year and then I’ve kept going, supporting myself doing my own music and playing gigs.

“I haven’t really played many games in the last couple of years but it’s always been a hobby for me, so I just decided one day that I should just combine the two. I’ve already got a lot of experience composing game music so I thought I could do that and add guitar to that – fusion!”

“It’s really synchronistic because this weekend is the same weekend of the International Fingerstyle Guitar Championship in Wichita, Kansas, and this year was the first time I’ve been booked to play at the festival where that happens.

“I brought a band there and we played six sets, and on Saturday after the main stage set I jumped on a shuttle to get to the airport and come here!

“Discovering classical - Andrew York, his piece Sunburst - was kind of a pivotal moment for wanting to play fingerstyle. Before I was playing everything with a pick. Then Michael Hedges, years later when I discovered him, I listened to that album Aerial Boundaries every night.”

“My cousin played a guitar and that was how I started. Plini is also an inspiration for me - he tells a story with his music which is what I try to do.

“I want to thank you to my family and the people back in Japan that have supported me. I’m going to practice more and make more music!”

Be sure to check in later this week to see the final performances of each of three winners, but for now, congratulations to these three amazing guitarists!