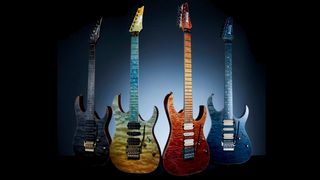 Ibanez’s J Custom line of electric guitars (the “J” indicates that the guitars are produced in Japan) is known for housing some of the company’s top-line instruments – master-built, small-batch models boasting exotic woods and unique fingerboards.

And the just-released 2020 collection might just feature some of the most impressive J Customs yet.

The new RG-style guitars are “inspired by the four spirits that govern fire, water, earth and wind," and sport unique wood combinations, high-end appointments, asymmetrical neck shaping and fret edge processing and, best of all, eye-popping finishes that extend from the body to the fingerboard and headstock with color gradation.

First up is the JCRG2001, which is available in two finishes – Salamandra and Undine. As for what, exactly, these colors imply?

There’s also Lo-Pro Edge tremolo bridges and chrome hardware, and pickups are a trio of DiMarzios – an Air Norton at the neck, a True Velvet in the middle position and a Tone Zone at the bridge.

The JCRG2002, meanwhile, comes in Gnome (“expresses a powerful and endless earth inspired by the spirit that controls the earth”) and Sylph (“inspired by the wind-controlling spirit Sylph and expresses the gently wrapped wind”) finishes.

Other features on the JCRG2002-GNM and JCRG2002-SLH include Lo-Pro Edge tremolo bridges and gold hardware, as well as the same DiMarzio Air Norton / True Velvet / Tone Zone pickup combination as the JCRG2001 models.

Prices are still out on the four guitars, but given the high-end features and limited runs, we’re guessing they won’t come cheap.

To find out more, head over to Ibanez Japan.