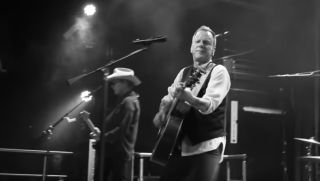 Actor and guitarist Kiefer Sutherland, who has more than 300 shows under his belt and a lifetime of love for music and storytelling, will release his sophomore album, Reckless & Me,” on April 26. The 10-track opus follows on the heels of Sutherland’s acclaimed debut, Down in a Hole, which showcased his infectious brand of Americana/country-rock and his whiskey-soaked growl.

Produced by Jude Cole, Reckless & Me also highlights Sutherland’s master storytelling ability, particularly on songs like “Something You Love,” “Open Road” and the locomotive-like “This Is How It’s Done.” All of which lend themselves equally well to both the record and live performance.

Guitar World recently spoke with Sutherland about guitars, songwriting, Reckless & Me and more in this exclusive interview.

What originally inspired you to record your own music?

I never intended to make a record. I had a bunch of songs I liked and took them to my best friend and incredible producer, Jude Cole, with the possibility of sending them off to see if another artist would record them. After the first few songs Jude said, “I think these are great and you should make a record.” Being incredibly aware of the stigma of an actor doing music I was a bit hesitant, but we decided to record a few more songs to see where we were at. I think it was somewhere around the sixth song that I realized how much I loved the songs and the way Jude was making them sound. We decided to move forward and made the record Down in a Hole and it was one of the best times of my life.

What was the musical direction for the new album, Reckless & Me?

Even though a few of the songs on the new album were inspired by things that happened in my life, a lot of them are songs I wanted for our live set. I thought, Wouldn’t it be great if we had a kick-ass honkytonk song with a driving beat to get the audience moving? That’s when I wrote “This Is How It’s Done.” Then Jude and Brian MacLeod (drummer) sped it up with a relentless locomotive-doing-100-mph backbeat. That song went on the record because I knew it would be great for our set. Then there’s “Something You Love,” which is another driving song that Jude and I wrote together. Instead of sitting in the studio thinking about what sounds would work or what was the most emotionally moving, the choice and direction of the songs for the album were ones that would make for a better show. I’m thrilled with how the record came out and am so excited to be able to go out and play it.

I usually have a guitar with me so typically what I’ll do is noodle around until I find a few chords I like that sound good together. Then it becomes a matter of finding out where they go. The thing I love about acting and songwriting is being able to tell an interesting story. So, if I can get a lyrical idea down, I’ll usually come up with a melody as well. Sometimes Jude will even alter the melody, which is why we always write together. He has a great melodic sense.

What are some of the creative similarities between acting and being a musician?

They’re both different in the sense of what you’re doing and what you’re creating. Both tell stories but one is telling them through music, melody and lyric and the other through dialogue, action and drama. The process is similar in the timing. You might watch a scene in 24 that’s two-and-a-half minutes long, but it could’ve taken us 14 hours to shoot. It’s the same with making a record, where you take some time doing your part but then have to wait for everyone else to finish theirs. It takes time but when you see—or hear—the final product, it makes it all worthwhile.

Do you have plans to tour in support of Reckless & Me?

We played almost 300 shows for Down in a Hole and I fully expect to do another 200 shows this year. Right now, we’ll be doing a few shows in the U.K. and then we’ll be back for the CMA Fest and 30 to 40 U.S. dates before we go back to Europe for some festivals.

Who were some of early musical influences?

I had an older brother who was a quintessential music person. Growing up, all he did was listen to his stereo. The first thing he played for me were artists like Elton John and the Beatles, which quickly brought in mid-70s rock like Boston, Aerosmith and AC/DC. As I got older and came into my own I started listening to Bob Seger and Jackson Browne. They had a profound influence on me because their songs told stories. Then I started hanging out with guys who loved outlaw artists like Waylon Jennings, Merle Haggard, Johnny Cash and Kris Kristofferson. As a listener, the jump from Seger and Browne wasn’t hard at all. The musicianship was different but the storytelling was similar. When I write, I float through those worlds. It’s about telling a story from beginning to middle to end. That’s where I landed as a songwriter.

What’s your current gear set up?
I use Wizard amps. They’re made by Rick St. Pierre, who’s a fantastic guitar tech out of Canada. I can’t recommend them enough. Onstage, I play a Fender Telecaster with a Hot Rails pickup. For most of the set I’m also on a Gibson Hummingbird or Dove.

We recently finished the third season of Designated Survivor for Netflix. That will be out in May and we’re really excited about it.

Do you ever foresee yourself focusing solely on music?

A lot of people have asked me if I’d ever give up acting for music and I tell them I’ll be an actor until the day I die. It’s one of the great loves of my life. I just happen to have found another, and if I’m lucky enough I’ll be able to do both.

For more information, head over to KieferSutherland.net.