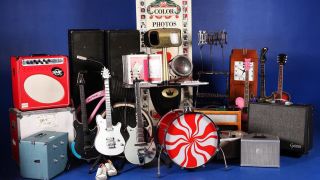 The auction takes place via Online Nashville Auctions from August 26 at 9 AM CST to August 30 at 9 PM CST. A portion of proceeds will go to benefit the John Peel Centre, Gideon's Army and the Detroit Phoenix Center.

Items on offer include stage monitor covers and pedalboards used on tour by the White Stripes, drum sets from The Hardest Button to Button video, clothing used in an array of video shoots and many guitars from Jack White’s personal collection.

Among those guitars are two EVH Wolfgang models, one that was used on White’s 2018 album Boarding House Reach and the accompanying tour, and that was modified with Lace Sensor pickups and momentary "interruptor" switch, as well as a custom wooden banjo arm-rest.

The other is a "base model" Wolfgang featured in White’s Over and Over and Over video and painted to match the black and white set. It comes complete with the original strings (including a broken one) from the video, as well as the sneakers he wore in the clip.

There’s also a Gretsch Triple Jet prototype used by White on numerous solo and Raconteurs tours, a black-and-yellow finished Orpheus, a Framus archtop and a pink Daisy Rock acoustic gifted to White by Wanda Jackson, who also signed the body.

Additionally, there’s a host of amps used on Third Man recordings over the years, including vintage National and Gretsch 6165 combos, as well as a 15-watt Sonic Machine Factory that White used on tour with the White Stripes.

One the pedal side of things, meanwhile, White is auctioning off a slew of unusual stompboxes, including a Molten Voltage G-Quencer, a Sitori Sonics Swinger, a Celestial Effects Cancer Wah The Fuzz? and a Far East Electric Maboroshi, a rare Japanese fuzz from his personal collection.

And if you need a place to put ‘em all, there’s also a White Stripes pedalboard up for bidding. As the listing says, "Don't be fooled! This beat up piece of plywood is actually a rare piece of White Stripes tour memorabilia. Once the resting place for some of Jack White's tone/pitch bending, mind-altering pedals. Don't miss your chance to own one of the most coveted pieces of plywood of all time!”

All items come directly from Third Man Records and have a certificate of authenticity. Visitors must register an account to bid, and bids of $1,000 or above will be approved by an auction house.