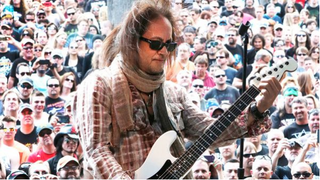 Today, we're thrilled to team up with Jake E. Lee's Red Dragon Cartel to premiere the music video for "Havana," the rollicking first single off their upcoming album, Patina. You can check it out above.

Patina is the band's first release with Esposito on bass and Phil Varone behind the kit. You can check out its cover art and tracklist below.

"I chose 'Havana' as the first song to be released from the new album for a few reasons," Lee told Guitar World about Patina's lead single. "First off, it begins with a lone guitar playing the riff, promoting the idea that this is a guitar-heavy record. The song's production is about as straightforward and basic as it gets on this album and I wanted it to be apparent that, overall, it's more of an old school approach, as opposed to its predecessor [Red Dragon Cartel's self titled, 2014 debut album.] And, it's just a cool riff I couldn't wait to share with anyone interested in what I'm doing!"

Lee also told Guitar World about Red Dragon Cartel's newest members, saying: "Anthony Esposito is on bass. I first met him when he was a part of the original Lynch Mob. He brings with him not just the solid, groove-oriented style he's known for, but a very lyrical and inventive, not unlike John Paul Jones, presence to the tracks.

Phil Varone is the drummer," Lee continued. "He was originally in Saigon Kick (one of the best band names ever) and, like Ant, is a very solid and groove oriented player, who is not afraid to turn things upside down to give the song a more unique flavor."

For more on Red Dragon Cartel, point your browser over to redragoncartel.com.

04. The Luxury Of Breathing