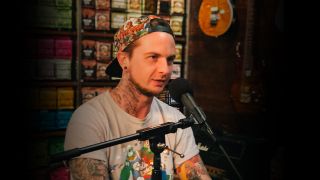 Ernie Ball has released the second episode of its new podcast series Striking a Chord featuring an interview with fleet-fingered multi-instrumentalist and composer, Jason Richardson.

Known for his near-supersonic and highly technical playing style in All That Remains, Chelsea Grin and Born of Osiris, Richardson discusses the first time he picked up  guitar, musical inspirations, his recent signature guitar collaboration with Ernie Ball Music Man, and much more.

The episode is hosted by Ernie Ball brand ambassador Evan Ball. You can check it out on iTunes, Google Play, Spotify, and other platforms.