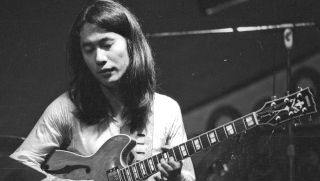 Jazz-fusion great Ryo Kawasaki died on April 13 following what has been described as a “short illness.” He was 73.

A composer and bandleader in addition to an electric guitar player, Kawasaki is best known as one of the pioneers of the fusion genre and for working with Roland and Korg to help develop the guitar synthesizer.

He also created the Kawasaki Synthesizer program for the Commodore 64 system.

Born in Tokyo on February 5, 1947, Kawasaki developed an interest in jazz and electronics at an early age. He played guitar, piano and violin and built his own radios, televisions, amplifiers and speakers.

In 1973 he relocated to New York City, where he joined up with jazz composer and pianist Gil Evans, appearing on several of his recordings, including 1974’s The Gil Evans Orchestra Plays the Music of Jimi Hendrix. He also established himself as an in-demand session player and performer, working with artists like Chico Hamilton and Elvin Jones.

In addition to being featured on other musician’s projects, Kawasaki's solo discography boasts more than 30 albums of his own.

He invented his own guitar synthesizer in 1979 and performed with it often throughout the early 1980s. He also devoted much of his time during the decade to developing music programs for the then-new Commodore 64 computer, including Kawasaki Synthesizer and Kawasaki Rhythm Rocker.

In the late 1980s he hit the charts with a string of self-produced and -released 12-inch dance singles that combined free-style, acid house and ambient music.

He returned to the guitar as his primary instrument in the 1990s, and spent the last 20 years of his life and career based out of Tallinn, Estonia.

In 2016, Kawasaki formed a new quartet, Level 8, which featured exclusively Estonian musicians. Their self-titled album, a mix of funk, fusion and jazz rock, was released the following year.

“My daddy. A true original. Just as your name suggests, you did illuminate, set it afire, and your fire will burn forever as your music plays on and we continue to carry your light. I love you. Ciao Papa.”