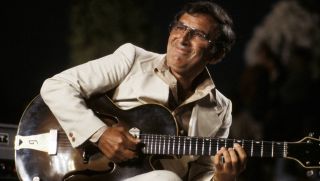 His daughter, Mary, reported that Pizzarrelli had tested positive for the coronavirus.

"There will be some kind of tribute as soon as we can all get within six feet of each other," said his son, the famed jazz guitarist John Pizzarelli.

Born in Paterson, New Jersey, John Paul “Bucky” Pizzarelli spent much of the first half of his career as a supporting player in bands and on recordings. But beginning in the late ‘60s he started to step out into the spotlight, working with Benny Goodman and violinist Stéphane Grappelli, among others, and in a celebrated guitar duo with George Barnes.

In 1980 he began performing and recording with his son John, a partnership that came to define the last 40 years of his career.

Pizzarelli was also known for his use a seven-string guitar, with an additional string tuned to a low A that helped him to play his own basslines. He was first turned on to the instrument by jazz and swing player George Van Eps, who released a 1967 album titled George Van Eps' Seven-String Guitar.

"I always wanted to do solo guitar playing, and when we heard George play, he was demonstrating the Gretsch seven-string that he developed,” Pizzarelli told NPR in 2009.

“He was knocking everybody out. After that, we all went to Manny's Music Store on 48th Street and bought out whatever seven-strings they had.”

As for the appeal of the seven-string, he told The Last Miles, “It gives it in a new dimension. You can play in all the keys properly, which you can’t do with six-string, because you have to depend on the open and closed strings.”

A master rhythm player and soloist, Pizzarelli began his professional career at 17, joining a big band led by Vaughan Monroe. After leaving for a two-year stint serving the U.S. Army, he returned to Monroe’s band until 1953.

In the next phase of his career he established himself as a first-call sideman, and his playing can be heard on scores of recordings, from Ray Charles’ Georgia On My Mind to Ben E. King’s Stand By Me to the novelty hit Itsy Bitsy Teeny Weeny Yellow Polka Dot Bikini.

Beginning in the early ‘50s, he also had a long employment as a staff musician for NBC, eventually playing under Doc Severinsen in the Tonight Show band. He later moved to ABC and worked for the Dick Cavett Show.

He performed at the White House for President Ronald Regan twice, the first time in 1982 as part of the Benny Goodman Quartet, and for Bill Clinton in 1998 with violinist Claude “Fiddler” Williams.

Pizzarelli had long associations with Goodman and George Barnes, but it is his work with his son, John, for which he became most noted.

The two recorded numerous albums together, including 2015’s Paul McCartney tribute, Midnight McCartney, and played hundreds of shows as a duo around New York City and New Jersey, with the elder Pizzarelli on his signature Benedetto seven-string guitar. He continued to perform into his 90s, even after a stroke in 2016 left him debilitated.

Discussing how he managed to continue to play for so long and so well, Pizzarelli told The Last Miles:

“Every day I get up and I try to correct what I screwed up the night before. That’s my theory. I prepare for the next time."