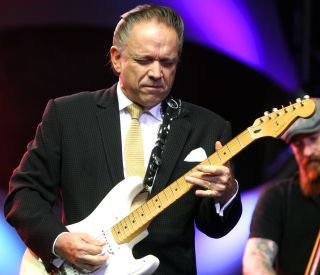 Austin guitar great Jimmie Vaughan has released details about his new album — Baby, Please Come Home — which will be available May 17 via the Last Music Co. The disc, a righteous celebration of blues in all its forms, is Vaughan’s first studio release since 2011’s Plays More Blues, Ballads & Favorites and comes hot on the heels of the Jimmie Vaughan Trio's 2017 highly regarded album, Live at C-Boy’s.

• Stevie Ray Vaughan and Dick Dale Play "Pipeline," a Video That's Got It All

Below, you can check out our exclusive premiere of “Be My Lovey Dovey,” the world’s first taste of the new album.

“I got the song from Etta James,” Vaughan tells us. “I’ve always been a huge fan. The song is complete goo-goo, romantic, love, ridiculous … like in real love.” The track also features a healthy serving of Vaughan’s instantly recognizable six-string phrasing and unadorned Strat tone.

Baby, Please Come Home also packs in covers of songs by guitar greats T-Bone Walker, Clarence “Gatemouth” Brown, Jimmy Reed and Lefty Frizzell, not to mention Lloyd Price, Jimmy Donley, Richard Berry, Chuck Willis, Bill Doggett and Fats Domino. It’s an eclectic mix for sure — but, as Vaughan puts it, “When I was young, I didn't really pay much attention to categories of music. I just heard what I liked and decided to explore that. And that’s really what I’m still doing.”

Vaughan’s just-announced tour dates can be found below. For more information, check out jimmievaughan.com.