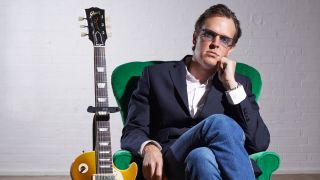 Look, we write about Joe Bonamassa a lot. We hear you. But when arguably the world’s biggest blues guitarist singles out one other electric guitar player with a definitively superlative statement, we had to share the news.

In a new Instagram post, JoBo - who is in the midst of his Keeping the Blues Alive cruise - enthused, “Our best Ballad of John Henry of all time. Thank you to Eric Gales for showing us all how it’s done!

“You are the best guitarist in blues rock and that the world has right now. Epic in every way!”

Our best Ballad of John Henry of all time. Thank you to Eric Gales @rawdawgmusic for showing us all how it’s done!! You are the best guitarist in blues rock and that the world has right now. Epic in every way!! 😎👍 Joe Bonamassa

Presumably, Gales was a special guest, since he wasn’t featured on the bill for this year’s cruise, which included the likes of Peter Frampton, Joanne Shaw Taylor, Larkin Poe, Eric Bibb, Bernie Marsden, Curtis Harding, Philip Sayce and many more.

Gales’ effortlessly fluid playing style was most recently showcased on his latest album, The Bookends, back in February, which featured collaborations with the likes of B. Slade, Doyle Bramhall II and Beth Hart.

Bonamassa certainly seems sure of his opinions these days, having named the ‘best’ guitar in his incredible collection only last week.