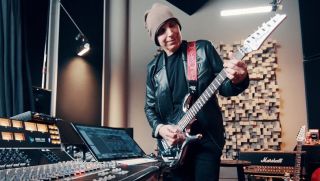 Said Satriani in a statement, "I'm happy to be working with IK Multimedia. I've used AmpliTube software at home, in the studio and on several albums. And now, the AXE I/O ups my game in the studio."

Satriani also shared his thoughts on digital recording and the role of the AXE I/O: "When I saw this, I thought, 'Oh wow this is great. I know exactly how I'm going to use this.' What guitar players really want is to see a clear place to plug in. They want control over the gain of the input and the nature of the input in itself. This [AXE I/O] is actually affording the guitar player all those things and you've got those extra controls that you can play with the impedance in a way that would mimic the difference between a vintage Strat and a brand new guitar."

To promote the union, IK has collaborated with Satriani on a series of videos in which the guitarist talks about his approach to recording and his use of AmpliTube and the AXE I/O in the studio. You can check out the first one below.

Additionally, IK has announced a firmware update to AXE I/O, improving its onboard Amp Out feature that eliminates the need for a DI box during the re-amplification process. The AXE I/O's software control panel will now also feature a "To Amp Out" button that routes the Instrument Input 1 directly to the Amp Out with zero latency.

For more information, head over to IK Multimedia.