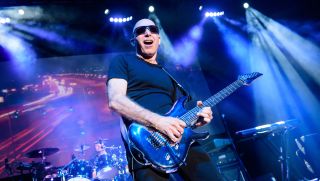 Given the fact that Joe Satriani has been one of instrumental rock’s leading artists for, oh, 35 years or so, you would imagine that the electric guitar player would spend a lot of his writing time composing his solos and leads.

According to Satch, you’d be wrong.

Discussing the writing process behind his solos, going back to the days of his landmark Surfing with the Alien record in 1987, Satriani recently told Guitar.com:

“Actually, the only one that was really composed on the Surfing record was Crushing Day, and that’s because it was so damn long and repetitive, I thought I’d better plan something out. And I regretted it, because I don’t find joy in repeating something that was worked out.

“I find joy in trying to capture something that was spontaneous, over and over again. Take Flying in a Blue Dream, that track is so spontaneous. It’s got so many problems in it but it has this charm. Every time I play it, it’s so much fun to sort of wrestle with the issues – that I feel like I can now can solve – but still maintain the charm of it.”

Back in 2017, Satriani admitted that he wasn’t the only one that had reservations about the Crushing Day solo. His friend Steve Vai thought it was a bit of a stinker as well.

“Steve really loved the record,” Satriani said. “But I remember when it came to talking about that song, he just said, ‘Yes, it’s a really cool song – solo’s kind of worked out, though, isn’t it?’ ”

Satriani recently announced his 17th solo album, Shapeshifting, due out April 10 via Sony Music/Legacy Recordings, and revealed the first single from the effort, the retro-flavored Nineteen Eighty.

Now he’s offered up a second, and once-again aptly-named tune from the forthcoming record, Big Distortion. You can check it out above – we guarantee you’ll dig the solo.