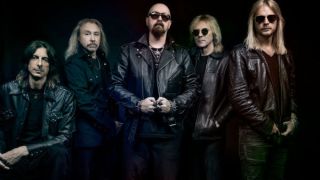 Judas Priest’s latest album, Firepower, has been a critical and commercial success, even as the band has struggled internally with guitarist Glenn Tipton's ongoing battle with Parkinson's disease. Onstage, the 70-year-old guitarist’s spot has been filled by producer Andy Sneap, though Tipton has also made a few surprise live appearances with the band.

In a new interview with Musik Universe, Judas Priest bassist Ian Hill—the band’s sole original member—was asked if Firepower might turn out to be the legendary metal act’s final album.

Hill responded: “We're not planning on that. There's no reason why there shouldn't be anything. Glenn can play for short periods of time—even on a bad day, he can do that. It's just that he can't handle a full set at the moment. That may change—there may be procedures coming along that will help him along—but there's no reason why he shouldn't be able to write new songs. And he's capable of playing for short periods of time on the album as well. So we're not planning on Firepower being the last album."

Whether or not there will be more studio albums, Priest will certainly be active for the foreseeable future. Frontman Rob Halford recently revealed that plans are underway to celebrate Priest’s 50th anniversary in 2019.

As for how long Andy Sneap will remain in the guitar slot, Halford said in an interview on Rock Talk with Mitch Lafon, “He's committed to this band for as long as we need him.”

"I think I can safely say that Andy will be with us through what's left of the Firepower tour, which is gonna be [going] through the rest of this year and most of next year as well,” Halford continued. “Where we go from that, we can't even look and see. We're just very happy to have Andy with us. Glenn's happy to have Andy doing his parts on stage for him. Andy's carved out his own little kind of way of expressing himself, he plays the songs really well, and the fans have accepted him for doing something very generous. So it's a feel-good story, definitely."