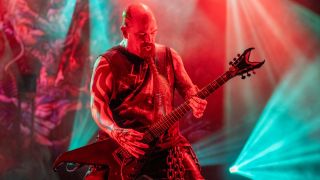 Slayer may have parted ways at the end of 2019, but Kerry King has certainly been busy during the 2020 lockdown, revealing he already has enough material for two albums.

King shared the news in a new interview with Dean Guitars, while discussing his approach to riff-writing.

“I’ve been very lucky with riffs in 2020 – maybe because I can't go anywhere,” King says. “But riffs have not been a problem. And looking forward, what that means for me is I’m going to be able to pick the best stuff – and it's good stuff.

“I’ve got more than two records’ worth of music, but to be able to go through that and pick the best 11 or 12? That first record should be smoking.”

That said, King hasn’t quite determined who will be performing those songs with him, so it’s unclear at this stage whether this will be a solo project or an entirely new band.

“I’m the only lyricist, because I’m the only one writing music,” he says. “I’m not positive who everybody is that's going to be playing with me. I’ve got to pick those songs and start trying to put lyrics on them to move the process forward.”

The Slayer icon was also quizzed on how he comes up with his trademark solos – and his response was typically good-humored.

“Throughout my career, unfortunately, being not only a songwriter but a lyricist too, by the time I get to leads – I don’t want to say an afterthought, because it’s never an afterthought, but it’s at the end of the process.

“I’ve got to make sure the lyrics are up to speed with the rest of the music, so you’ve got an entirely great product. Then is usually when I get to have time to make up or work on leads.

The longtime B.C. Rich endorsee made the surprise announcement that he was switching to Dean Guitars in October last year.

In an interview with Guitar World about his collaboration with Dean, King teased a new post-Slayer project, stating, “Dean didn’t sign me for nothing!”