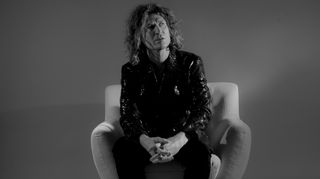 When you see lists of the great riff-writers of recent times online, and god knows we at Guitar World have written our fair share, one name that almost always seems to escape recognition is Dave Keuning.

Mind you, Keuning is the man behind the instantly recognizable fretwork and musical vision that powered "Mr. Brightside," the soaring, era-defining anthem that launched his band, The Killers, to superstardom in 2004.

That's why today we're super excited to team up with his new band, Keuning, to premiere the video for his latest earworm, the beautifully evocative "The Queen's Finest," below.

"The Queen's Finest" is one of the highlights from Keuning's debut, Prismism. Set for a January 25 release, Prismism finds Keuning playing every instrument (save for a few drum tracks) and handling lead vocals for the first time.

While demonstrating many of the same sonic influences as the band with which Keuning first made his mark, "The Queen's Finest" unfolds gracefully with a refined, warm sense of restraint that stands in stark contrast to the festival grounds-sized ambitions of The Killers.