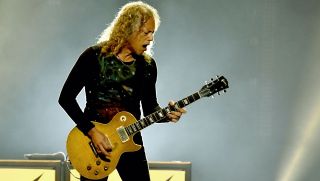 Kirk Hammett recently stopped by the Let There Be Talk podcast and went deep on “Greeny” – his 1959 Les Paul Standard electric guitar that was famously owned by Fleetwood Mac founder Peter Green and, subsequently, by his disciple, Irish rocker Gary Moore.

In addition to recounting the story of how the iconic guitar came into his hands, he also dropped some new Peter Green-related nuggets.

For starters, Hammett revealed that when he recently met Green – for the first time ever – at his house in the south of London, the Fleetwood Mac legend didn’t acknowledge the Les Paul.

"I said to Peter, 'Hey man, I have a friend of yours in this bag,' ” Hammett said during the interview, transcribed by Ultimate Guitar. “And I pulled it out, I showed it to him, and he said, 'That's not my guitar,' which is his stock answer whenever he's asked about Greeny.

"And the reason why he said that is because he doesn't see the red in the finish. So, he says, 'Oh, that's not the guitar, my guitar was red.' His friend who was just sitting across the room says, 'He knows that's his guitar.' So, that's just kind of a thing he does.”

Hammett also stated that he played Green a version of the Fleetwood Mac ballad Man of the World that he recently recorded at Abbey Road for a tribute album.

"It gets a little uppity in the end, and what I did was I just modernized the whole song, modernized it with modern tones, kind of like a more modern arrangement. I've made the uppity part heavy and dynamic,” Hammett said.

"I didn't know if he liked it or not. The guy named Mark, who's spearheading this whole project, he told me that Peter liked it, and he was able to determine that from Peter's body language.

"I said, 'What do you mean?' It looked like he was more interested in the weather.' And he said that when he was listening, he was tapping his foot, and by the end, he was making kind of guitar movements with his hand, and Mark said that it was a very positive thing.”

Regarding the upcoming Peter Green tribute album, Hammett revealed that he plays on two songs – Man of the World and Need Your Love So Bad. And what's more, he also sings on the former track.

"There was a demo of this one song called Need Your Love So Bad that they found," Hammett said. "It's a demo; Peter Green sang that song in his bedroom, and at the end of it you could hear his mom saying to turn it down or something like that.

"So what they did, they took that vocal track and they isolated it, and they've created an augmented instrumentation track done by David Gilmour. So the song Need Your Love So Bad, [was] created by David Gilmour and his band, and they flew in the vocals on top of it.

"It's a more modern, updated version of Need Your Love So Bad, and that's one of the tracks. The other track is Man of the World with myself and Mick Fleetwood.

"I am singing on it; it's an easy song to sing, it's got that talk-singing kind of thing, I can handle that. That's about the length of my singing abilities, but I'm into it. I'm so into it, I'm into all aspects of it, it's just one of those things, it just kind of unfolded like this.”