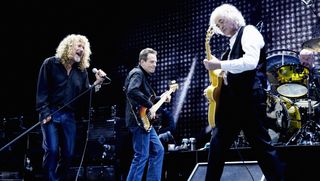 Miss checking out concerts during all this quarantine down time? Well then, how about some live Led Zeppelin to fill your days and nights?

The band has partnered with YouTube for an exclusive streaming event of Celebration Day, which chronicled Robert Plant, Jimmy Page and John Paul Jones’ 2007 reunion performance (with Jason Bonham on drums) at London’s O2 as part of the tribute concert for Atlantic Records founder Ahmet Ertegun.

As Page told Guitar World about the reunion gig at the time, “This was going to be a critical show. We only had one shot at it, so we needed to go out there and do it really well.

“There was a lot of listening to be done, a lot of communication - nods and winks - and you can see this generate through the course of the evening to the point where we’re really communicating through the music.”

Celebration Day will premiere May 30 at 8 PM BST and be streamed in its entirety for three days only on Led Zeppelin’s official YouTube channel.