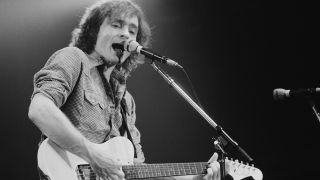 Marty Balin, co-founder, co-vocalist and guitarist of legendary psychedelic rock band Jefferson Airplane, has died at the age of 76. His death was confirmed by his representative, though no cause of death was given.

Born Martyn Jerel Buchwald, Balin was already a mainstay of the San Francisco scene—he released a couple of unsuccessful singles as a solo folk singer and owned the city's Matrix nightclub—when he teamed up with guitarist Paul Katner after meeting him at a hootenanny.

The duo was soon joined by guitarist Jorma Kaukonen, bassist Jack Casady, drummer Skip Spence and singer Signe Toly Anderson, and it was with this lineup that the band, now called Jefferson Airplane, recorded their 1966 debut LP, Jefferson Airplane Takes Off. It was only when the group picked up vocalist Grace Slick though, after Anderson's departure, that the group really took off.

Balin co-wrote five songs on the band's blockbuster 1967 hit LP, Surrealistic Pillow, and performed onstage with the group at the 1967 Human Be-In in San Francisco’s Golden Gate Park, Woodstock and the Monterey Pop Festival. After becoming disillusioned with the group's heavy drug use however, Balin left the group in 1971.

In 1975, Balin re-teamed with Katner to co-found Jefferson Starship, a side project that proved to be almost as successful as the main group it sprung from. Balin sang lead on four of the band's Top 20 hits, including "Miracles," before parting ways with the group in 1978.

Balin's solo career, which began with his self-titled, 1981 debut album, produced a couple of Top 40 hits—"Hearts” and “Atlanta Lady (Something About Your Love).” He would go on to record a total of 11 solo albums, and would reunite with Jefferson Airplane in 1989 for a brief reunion tour, and with Jefferson Starship from 1993-2008.

In 2016, Balin underwent open-heart surgery at New York City’s Mount Sinai Beth Israel Hospital. He sued them for medical malpractice, claiming they had caused him a number of injuries, including a paralyzed vocal cord, kidney damage, as well as the loss of his left thumb and half of his tongue.