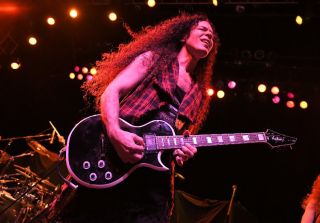 Marty Friedman has joined IK Multimedia’s family of artists. According to the company, the former Megadeth guitarist and current solo instrumental artist, has “recently been exploring the combination of IK's AXE I/O premium audio interface for recording and re-amplification, and IK's acclaimed AmpliTube amp and effects modeling software.”

AXE I/O is a professional 2 in/5 out audio interface and controller designed for making recordings faster, easier and better. The AmpliTube software and app recreates the entire guitar/bass signal chain from instrument to recording device and is available for Mac, PC, iPhone, iPad and Android.

Said Friedman, "Between AmpliTube and the AXE I/O, I get unlimited combinations of real amp sounds; even at home. It's re-amping gone mad. And for someone like me who doesn't like to spend a lot of time turning knobs to get great tone, it's perfect."