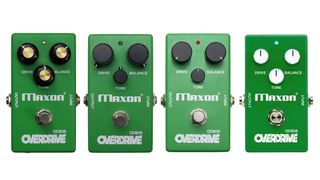 Maxon is certainly celebrating the Tube Screamer’s 40th anniversary in style - not content with tapping up pedal legend Robert Keeley, the Japanese company has now teamed up with stompbox behemoths EarthQuaker Devices, Catalinbread and Pigtronix to deliver three further fresh takes on the iconic overdrive pedal.

Catalinbread’s Nicholas Kula has lent his talents to the ‘ODin808’-modded OD808-40C, which aims to deliver “creamy articulate drive” that suits any instrument or amp.

There’s a flattened midrange to this heavily modified offering, taking it into distortion territory.

Each pedal is limited to just 400 units and available in late-November (apart from the Keeley, which is available now) for $199 each. The first 40 units of each pedal will be hand-signed by the relevant builder, and include additional aesthetic or circuit tweaks for $400 apiece.