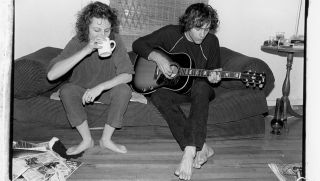 David Roback, a co-founder of the influential alt-rock band Mazzy Star, died on February 25, a representative of the band confirmed. The guitarist, songwriter and producer was 61.

Roback was raised in Southern California, and played in a band named the Unconscious which also featured Susanna Hoffs, who would go on to sing and play guitar in the Bangles.

He would become a key figure in the Paisley Underground, defined by bands that combined psychedelia, rich vocal harmonies and intricate, often clean guitar interplay in the style of '60s bands like Love and the Byrds.

“When I started playing music, it came out sounding very psychedelic for whatever reason,” he told the LA Times in 1990.

“I guess it was just what I grew up liking. The Beatles and Jimi Hendrix were the best groups for me. The late Beatles more than the early Beatles – their message, the whole political and spiritual involvement.”

While on tour with the Jesus and Mary Chain in support of their first full length, 1987’s Happy Nightmare Baby, Smith left the band, and was replaced by singer Hope Sandoval. Together, Roback and Sandoval transformed Opal into Mazzy Star.

As Mazzy Star, the pair perfected a hazy dream pop sound characterized by Roback's ambient guitar playing and slide work and Sandoval’s detached vocal style. The band’s 1990 debut, She Hangs Brightly, was a minor hit – and was later cited by Kurt Cobain as one of his top 50 albums.

But it was their second effort, So Tonight That I Might Sleep, that made the band stars, on the strength of Fade Into You, which featured Roback on acoustic and slide guitar. Though the song was not a huge hit in the traditional sense – it only reached number 44 on the Billboard Hot 100 – it was in constant rotation on MTV and became a defining song of the early-'90s alt-rock boom.

In an rare interview to promote Seasons of Your Day in 2013, Roback summed up the Mazzy Star aesthetic.

“We’ve always experimented with different sounds and different textures, but ultimately we’ve always just made the music we wanted to make that sounded the way we wanted it to,” he told Stereogum.

“We make music that we’d also like to hear. That’s what we’ve always done.”