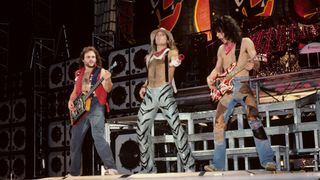 Late last year, thanks in part to some eyebrow-raising comments from David Lee Roth, rumors swirled that the original lineup of Van Halen would reunite for a 2019 summer tour.

Though Michael Anthony, the band's former bassist, quickly put those rumors to bed after saying he had not been in contact with his former bandmates, it turns out that there might have been some meat on the bone of the rumors after all.

In an interview with Eddie Trunk on SiriusXM’s TrunkNation, Anthony said “I can tell you, I spoke with (Van Halen’s manager) Irving Azoff last October—that’s when I first heard from him—and he asked if I would be interested in any kind of a reunion, and I told him, I said, ‘Yeah.’ I was finishing up a couple of shows with Sammy [Hagar] and I said, ‘Yeah, I’d be interested to hear what you guys have going on. I’ve got these few dates left, and give me a call.’

“And then, right after the first of the year, David Lee Roth’s business manager or lawyer, or something, got ahold of me about a meeting or something. And so at that point, I gave it over to our manager, because I didn’t wanna start getting in this whole thing—I wanted to do it the correct way, especially after the way things went for me in 2004 (when Anthony was fired from Van Halen).

“From what I’ve heard, and I haven’t spoken to any of the guys, they were gonna try to plan a thing for this summer, And for whatever reason… I was never… My people were never… They never got in touch with us about any kind of a contract or any kind of a meeting to discuss or whatever. And the next thing I knew, the plug got pulled on it.”

Anthony said he had even cleared his summer schedule for the potential reunion. “The reason the Circle is taking a break right now is that if things would have worked out as they were starting to go and was planned,” Anthony said. “We would have been in pre-production rehearsals with Van Halen right now.”

Michael Anthony says to @EddieTrunk in regards to a @VanHalen reunion ... that had it worked out, we'd be rehearsing right now ... catch the full interview from Wednesday's show anytime you want via @SIRIUSXM on-demand! @siriusxmvolume #TrunkNation pic.twitter.com/OskYFdpMuoJune 20, 2019