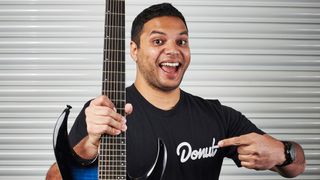 Let’s just admit it – all this self-distancing and quarantining-at-home has led to us losing our minds just a little bit.

Clearly, it’s even pushed Misha Mansoor to his limit, as the Periphery electric guitar maestro has delivered his own twisted version of Stairway to Heaven.

In a video uploaded to Instagram, Mansoor grabs a rather sweet-looking Fender Japan Modern Stratocaster HH to fingerpick the intro to the Led Zeppelin classic – with all the minor chords replaced with major chords.

The result? Mansoor calls it Escalator to Hell – although it sounds like quite a pleasant journey, really.

We suggest whipping this one out to get around the “No Stairway” rule the next time you’re in a Guitar Center – whenever that may be. And, as far as we know, there were no lawsuits involved in the making of this video.

Mansoor isn't the only guitarist to offer up his version of Stairway during the coronavirus lockdown, as Adam Sandler - of all people - played the song's climatic solo during a video-chat episode of Conan.