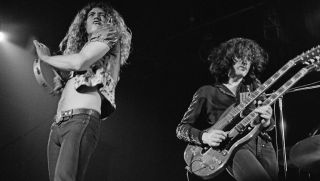 The protracted copyright battle over Stairway to Heaven appears to have come to an end, with the Ninth U.S. Circuit Court of Appeals in San Francisco ruling in a 9-2 decision on March 9 that Led Zeppelin did not steal the song's iconic opening acoustic guitar intro.

The ruling affirmed a decision by a Los Angeles jury in 2016. That case saw a trustee representing the estate of late Spirit guitarist and songwriter Randy Wolfe (a k a Randy California) accuse Led Zeppelin of lifting a piece of the 1968 Spirit instrumental, Taurus, for the intro to their own 1971 song.

The 2016 case was decided in Zeppelin’s favor, but in 2019, a ninth circuit panel ordered a new trial after finding errors in the jury instruction process at the first trial.

In particular, jurors had not been allowed to hear sound recordings of Taurus and Stairway, due to the fact that a judge had determined that only Wolfe’s sheet music, and not the actual sound recording, was protected under the 1909 Copyright Act. Taurus was written before federal law covered sound recordings.

In 2019, plaintiff's attorney Francis Malofiy argued that the copyrighted musical composition of Taurus should also include the song as it was recorded, rather than just transcribed on paper.

But on March 9 an 11-judge panel in San Francisco reaffirmed the 2016 ruling based on the 1909 Copyright Act, determining that the court was not in error for not allowing the jury to hear the Taurus sound recording at the original trial.

The appeals court also elected to ditch what is known as the inverse ratio rule, which states that the more access songwriters have to previously written works, the lower the bar for proving substantial similarity.

In the case of Zeppelin and Taurus, the original lawsuit claimed Robert Plant and Jimmy Page were familiar with Taurus because Spirit and Led Zeppelin had played shows together in 1968 and 1969.

The new ruling would seem to signal the conclusion of the case.

“The trial and appeal process has been a long climb up the Stairway to Heaven,” circuit Judge Margaret McKeown stated.