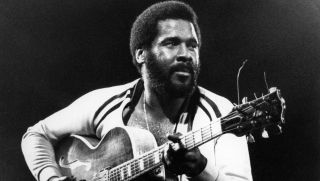 Guitarist Melvin Ragin, who was known as Wah Wah Watson, died on Wednesday. He was 67 years old.

“It’s with a heavy heart that we regret to announce the passing of my loving husband Wah Wah Watson today at St. John’s Hospital in Santa Monica,” the guitarist’s wife, Itsuko Aono, said in a statement. “He will be greatly missed, but music is eternal. Wherever he is, he’s groovin’.”

Watson was born in Richmond, Virginia, in 1950, and joined the Motown house band the Funk Brothers in 1968. He played on numerous r&b, soul, funk and dance hits over the next dozen years, including the iconic Temptations single, “Papa Was a Rolling Stone,” which features his trademark wah pedal-inflected lines.

Among the other classic songs and albums that Watson lent his guitar stylings to include The Jackson 5’s ABC, Marvin Gaye’s Let’s Get It On, Gloria Gaynor’s “I Will Survive” and Michael Jackson’s Off the Wall.

In an interview Watson explained how he came upon his signature sound: “When I first got to Motown, I didn’t play the wah wah,” he said. “But there was a guy named Dennis Coffey that did ‘Cloud Nine’ ‘Ball of Confusion,’ all that stuff. And I’m saying, ‘Damn, where did you get that from?” He said Oh man, it’s a wah-wah pedal’… So I went and bought a wah-wah pedal.”

When R&B experienced a resurgence in the Nineties Watson was once again in demand, playing on records by artists like Maxwell, Me’shell Ndegéocello and Brian McKnight.

In the 2000s he also played with pop stars like Alicia Keys and Janet Jackson. He released one solo album, Elementary, in 1977.

A cause of death was not immediately revealed.